Friends and money for a peaceful and secure Africa

This weekend, African Union (AU) leaders will be flocking to Addis Ababa for their annual AU summit. In 2020, South Africa’s president, Cyril Ramaphosa, takes over as AU chairperson from Egypt’s Abdel Fattah el-Sisi. His plate will be full.

The summit is a first opportunity for the AU and its member states to discuss this year’s theme: ‘Silencing the guns: creating conducive conditions for Africa’s development‘. But to deliver on this intention, the AU needs clarity on at least two of many priorities: 1) predictable funding, and 2) the future of the AU’s peace and security partnerships, including with the EU.

Originally, the theme reflected the ambition to ‘silence the guns’ by 2020, but this proved unrealistic. The upsurge of violence in Burkina Faso, escalating tensions in the Great Lakes region and the spread of Islamist extremism in Mozambique are just a few urgent crises the AU will need to deal with, in addition to enduring conflicts in South Sudan, the Sahel and Libya, and key elections in the Horn, including in Ethiopia and Somalia.

A Union in search of more autonomy

Over the past few years, the AU has invested in its capabilities to manage conflicts on the continent. Through the African Peace and Security Architecture (APSA), it has demonstrated its ability to manage different types of conflict – albeit with varying levels of success. These range from facilitating the political transition in Sudan in 2019 to responding to more volatile conflicts, like the one in Somalia. Yet it continues to be largely sidelined when it comes to internationalised conflicts, such as in Libya.

The AU seeks to embolden its agency and decision-making power on conflicts on the continent. More financial autonomy and predictable finance for conflict management, including for peace operations, is seen as a key provision. The AU has introduced various reforms towards achieving this.

The AU Peace Fund, an instrument put in place to finance peace and security activities, has managed to collect around $131 million from member states since 2017. That figure however falls short of the $400 million that the AU had planned to collect by 2020, and represents roughly 47% of the AU’s 2019 budget for peacekeeping.

Can Ramaphosa deliver on the high expectations?

South Africa, one of the biggest five contributors to the AU budget, takes over the AU chairmanship for the first time since 2002. President Ramaphosa expressed a number of wider ambitions on peace and security in his keynote address on his priorities for the chairmanship. He highlighted the link between peace and security and governance (including the African Peer Review Mechanism), and spent quite some words on his intention to advance gender equality, tackle gender discrimination and address violence against women and girls.

In 2019, South Africa obtained a non-permanent seat in the United Nations Security Council. As Ramaphosa, who was previously appointed AU champion on AU-UN cooperation, takes on the AU chairmanship, South Africa is expected to leverage its seat in favour of the continent. This would include a push for more UN funds for African peace operations. Previous failures to get UN-assessed contributions continue to weigh, yet the issue was ominously missing from Ramaphosa’s keynote address.

It is not given that Ramaphosa will invest much energy in making the continent’s peace and security challenges his top priority as the AU chairperson. Observers see more alignment between South Africa’s emphasis on economic diplomacy and the push to implement the African Continental Free Trade Area (AfCFTA), another priority noted in his keynote speech.

In addition, the president is facing several crises at home. This has included an energy supply crisis and a range of power cuts by the power utility, Eskom, and threats of water supply failures. South Africa witnessed new waves of xenophobic attacks in the past year, tarnishing the country’s ‘rainbow nation’ reputation and damaging its pan-African image. This all takes place in a context of slowing economic growth. The president cut short his attendance at a range of international meetings, including the UN General Assembly in September 2019, and the World Economic Forum, earlier this month, in Davos.

A chance to renew the partnership with Europe in 2020

As the AU chairperson, Ramaphosa will be the AU’s figurehead to engage with international partners, including the EU. The AU’s past failure to mobilise UN-assessed contributions for African peace support operations underlines the continued relevance of its partnership with the EU, which provides significant financial support to the APSA. The recognition of its status as a privileged partner likely contributed to offering the EU (as well as the UN) a role in the AU Peace Fund’s management board.

However, the EU itself is also looking to redefine its role as a security actor globally. In a context of international instability, including a perception of growing competition in Africa, the post-Brexit EU aspires to become more ‘geopolitical’, assertive and strategic in its engagements with the rest of the world. In this search, it has drafted proposals to create a European Peace Facility. This would not only step up the EU’s cooperation with military actors around the world, but also allow for a more flexible modus operandi of promoting peace and security in Africa beyond the regional and continental building blocks of the APSA.

This raises questions on whether the level of EU funding for African peace and security will be sustained, what type of support will be given and who will decide on priorities. The proposed reforms come with a potential risk of damaging the continent-to-continent partnership, as well as weakening the relevance of the APSA itself.

The political aspirations of both the AU and the EU also offer opportunities to move towards a real partnership of equals based on mutual interests. The next EU-AU summit, scheduled for October 2020 in Brussels, will provide the chance to renew the partnership. But this will require African countries to define a common approach towards Europe.

What steps will President Ramaphosa take to coordinate the AU’s position in the run-up to the EU-AU summit? Before then, which initiatives will South Africa take regarding predictable peace and security funding, and violence against women and girls? And how will Ramaphosa ensure stronger linkages between governance and peace and security, while tackling ongoing conflicts on the continent? Indications are that President Ramaphosa will be torn between his domestic priorities and the high expectations that his continental role will demand. 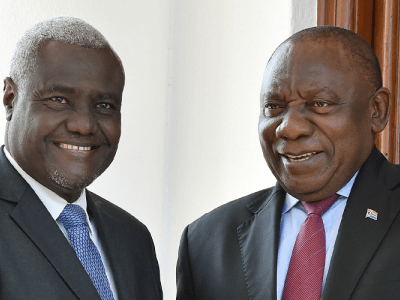 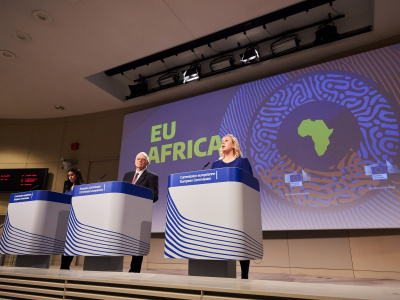 The EU and Africa: Should, would, could… but how?
Report 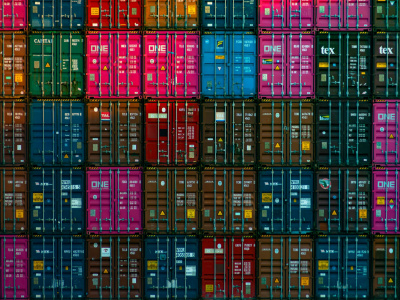 Strengthening the AU-EU partnership on the economic development and trade agenda
https://ecdpm.org/work/friends-and-money-for-a-peaceful-and-secure-africa