Uganda's refugee policies should serve as a model, but challenges remain in helping refugees become self-reliant. The case of Uganda invites us to recognise that solutions to displacement are all about policies – those of host countries and those of the international community regarding responsibility sharing.

Uganda hosts the largest number of refugees in Africa, with 1.35 million displaced persons residing in settlements and cities. Refugees have come to Uganda from the Democratic Republic of Congo, Burundi, Rwanda and Somalia – but especially from South Sudan. Between July 2016, when a new round of fighting broke out in the South Sudanese capital, and October 2017, Uganda received an unprecedented 790,000 new arrivals from its northern neighbour. In 2016, Uganda welcomed more refugees than the total number of refugees and migrants crossing the Mediterranean into Europe.

In a joint statement released in March 2017, the Government of Uganda and UNHCR said the situation was reaching a “breaking point”. Sixty-one per cent of South Sudanese refugees are children under the age of 18. Women and children make up 82 per cent of Uganda’s total refugee population.

The response of the Ugandan people and government has been remarkable. Settlement after settlement has been opened, reached rapidly full capacity and closed to new arrivals. New settlements
opened soon after that. Until mid-2017, it was not unusual for 14,000 people to cross the border every week. Yet in Europe this crisis has been underreported. Humanitarian agencies have tried to scale up assistance – with limited resources – to provide water, sanitation, food and emergency shelter for the growing population, particularly in the remote West Nile region.

Uganda is exceptional not only in its commitment to an open door policy for refugees, but also in having some of the most progressive refugee policies in the region, if not the world. Refugees in Uganda can choose where to settle, they have considerable freedom of movement and they have the right to work, as well as access to public services. The government aims to provide land for settlement-based refugee families, so they can set up a home and cultivate crops. Unlike some of its East African neighbours, Uganda does not have an encampment policy. Refugees in Ugandan ‘settlements’ live, receive government-run services and trade side by side with the Ugandan communities that host them. Cultural, linguistic and ethnic ties between Ugandans and the South Sudanese have strengthened host communities’ sympathy for their neighbours’ plight, and refugees have been largely well received. Uganda’s refugee strategy is part and parcel of its National Development Plan (NDP II), which also provides incentives for areas hosting refugees.

It is no wonder, then, that Uganda was selected as the first country to pilot the Comprehensive Refugee Response Framework (CRRF) as part of a global process to define how the international community should change its approach to refugee response. The CRRF was launched in September 2016 with the New York Declaration on Refugees and Migrants. Refugee self-reliance is a core element of the CRRF, as in Uganda’s own refugee strategy. The aim is to see refugees, especially those in situations of protracted displacement, move towards economic self-sufficiency and away from aid dependence.

And yet, the situation of refugees in Uganda cannot be described as rosy. The refugee influx has strained natural resources and services for refugees and host communities alike, particularly in West Nile. Already, there is a dwindling availability of land, pressure on water resources, environmental degradation and overstretched educational systems. This strain on scarce resources may well translate into increased tensions between refugee populations and their host communities, and threaten their peaceful co-existence. Despite the government’s best efforts, land for subsistence farming is available for only 55% of settlement-based refugee households. Even those who have been able to settle on a plot of land – whether because it was allocated to them or because they managed to lease it – continue to face stumbling blocks. They often lack the documents they need to secure their tenure, plot measurements and boundaries tend to be sketchy and land transactions often go unregulated. As time goes by, these kinds of problems will only exacerbate the challenges refugees face in Uganda.

Another challenge is that self-reliance is difficult to realise in practice. Self-reliance requires both a robust rights and rule-of-law environment and a dynamic economic climate. The legal right to work is one thing, but the ability to find and hold a job is something else entirely. This is doubly true in Uganda, one of the 30 least developed countries in the world. Uganda’s annual GDP per capita was just US $615 in 2016. Despite the difficulties, encouraging self-reliance among refugees remains critical, as a way to boost their economic contributions and participation, and because the skills they cultivate will continue to serve them if and when they return to their country of origin. Lost time is a major avoidable tragedy facing refugees. This is part of what needs to change in refugee responses. Using an approach sometimes called ‘early solutions planning’, humanitarian and development actors should be considering at the outset of an emergency how to design programmes to help refugees achieve lasting solutions to their displacement.

A central element in contributing to self-reliance and ‘early solutions’ is programmes supporting access to livelihoods and education. As NGOs we need to be much more sophisticated in our provision of livelihood and vocational skills training. We need to offer diversified skills training, based on the gaps and needs in local markets rather than the menu of training options we have been providing for decades. Refugees’ capacities should be nurtured by offering economic opportunities, creating new linkages, building skills in non-traditional livelihoods, providing access to microcredit and financial services and strengthening engagement with and investments in host markets, alongside business incubation and improved internet access.

Increasing access to education at all levels is key. Today the average student-teacher ratio is 120:1, and 46 per cent of South Sudanese children are not in school. This is unacceptable. Teenagers need support and accelerated learning programmes to catch up on the school they missed due to their displacement. Education is a life-saving form of aid in multiple ways. For one thing, hygiene and sanitation lessons taught in schools save lives by halting the spread of disease. Tertiary and adult education has to be covered as well, especially given the large proportion of illiterate adults among South Sudanese refugees. Illiteracy makes it harder for refugees to integrate and become financially independent.

A precondition to economic inclusion is the ability to be recognised as a refugee and to obtain legal documentation. While South Sudanese receive prima facie refugee status in Uganda, several other refugee groups do not, including those from Rwanda, Burundi, Somalia and Eritrea. Urban refugees face particular challenges in accessing the refugee status determination process. Their lack of status can lead to involvement in unregulated business activities that many times end in exploitation. Urban refugees also lack access to services.

But even more than practical changes, it is critical to change mind-sets – among refugees, among host communities and within the international community. It is not helpful to talk about refugees as a ‘burden’, as refugees have ample capacities and motivation to better their own lives. In an influential 2014 report and subsequent book, researcher Alexander Betts and colleagues examined ‘refugee economies’ and showed that refugees in Uganda often make positive contributions to the host state economy. Refugees are economically diverse, they have or can create transnational networks, and they often are not dependent on humanitarian assistance. While the huge influx of South Sudanese refugees complicates this picture in Uganda, the analysis is still highly relevant.

What is the international community doing for the 1.35 million refugees in Uganda? Far less than its fair share. When UN member states began in 2016 discussing the Global Compact on Refugees (an agreement that is coming up for states’ negotiation in 2018), their intention was to better define what it means to share responsibility for refugees. Broadly, sharing responsibility means either increased refugee resettlements or more massive financial support for countries hosting refugees. However, with the turn-around in the international rhetoric on refugees since the Brexit vote and the election of Donald Trump, countries like Uganda, which host large numbers of refugees, have been all but abandoned.

In June 2017, Uganda convened the ‘Solidarity Summit on Refugees’ to request international support for a refugee response that goes beyond humanitarian funding, to better link humanitarian and longer-term development efforts. Although the Summit successfully highlighted the plight of refugees in Uganda, it fell far short of meeting its US $2 billion financial target. Donors have somewhat increased funding for longer-term programmes, but resources are still inadequate in scale and duration.

There are new opportunities to be seized. The European Commission’s proposal to resettle 50,000 African refugees is a welcome one. CRRF implementation in Uganda provides a significant opportunity to bring representatives of the government, donors, humanitarian and development organisations, the private sector and other actors to the table to discuss, plan and jointly implement programming that moves away from an emergency response approach towards an approach that emphasises long-term development goals that benefit refugees and Ugandans alike. This vision can only be realised with sufficient resources to support it.

Finally, it is important to remember that there is more that Uganda and its allies can do, politically speaking. The number of South Sudanese in Uganda is expected to continue to rise, and refugees are unlikely to return home until a political solution is found to the South Sudan crisis. The conditions and vulnerability of refugees are ultimately a result of the failure of the international community to act jointly to preserve peace and security and prevent people from becoming displaced in the first place. Uganda and its neighbours in the Inter-Governmental Authority on Development, IGAD – the regional body tasked with brokering peace in South Sudan – as well as the whole international community must step up their efforts to bring the crisis to a resolution.

About the authors
Muhumed Hussein and Leeam Azoulay are Uganda Country Director and Advocacy and Policy Adviser for the Norwegian Refugee Council, based in Kampala. 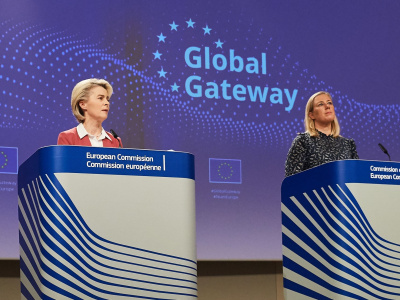 The EU Global Gateway – One year in: How to partner with the private sector?
Great Insights magazine
Financing Development: Editorial
Report
Identifying an Aid for Trade Agenda: Dialogue meeting on Challenges of Changing Agricultural Markets in the context of ACP-EU Trade
https://ecdpm.org/work/focus-on-migration-moving-backward-moving-forward-volume-7-issue-1-winter-2018/helping-refugees-become-self-reliant-the-ugandan-model