Mapping the potential of cross-border cooperation in West Africa

OJW
SV
% Complete
table of contents
Mapping the socio-economic potential of border regions can provide great insights as to where cross-border co-operation could be intensified in West Africa.

West African countries are divided by no less than 32 000 km of terrestrial borders, almost enough to go around the earth if placed end-to-end. Long seen as artificial barriers, these borders are now increasingly regarded as resources for regional integration due to the vibrant social, economic and cultural activities that take place in West African borderlands. African states and intergovernmental organisations have, for a few years now, recognised the potential of such borderlands for regional integration. The African Union Border Programme, for example, strongly encourages the development of cross-border integration dynamics supported by local stakeholders, and facilitates co-operation between states, regions and municipalities separated by national borders. But where exactly should cross-border co-operation take place? Should cross-border initiatives be intensified anywhere in West Africa as long as the stakeholders agree to work together? Or should cross-border co-operation target certain regions that would potentially be favourable for the development of joint initiatives? One of the aims of the ongoing 2015-16 West African Perspectives programme of the Sahel and West Africa Club at the OECD is precisely to tackle this issue. Combining cartography and social network analysis, we study to what extent the existence of social, economic and political disparities constitutes a source of synergies for cross-border co-operation in the region, or, on the contrary, a barrier to joint institutional initiatives. Our assumption is that the 153 regions divided by a terrestrial border in West Africa widely differ in terms of political systems and socio-economic development. This heterogeneity, we argue, affects their ability to engage in cross-border co-operation.

To illustrate the paradoxical relationship between development differentials and cross-border co-operation potential, we present poverty rates in three different ways: a territorial mapping of regional poverty rates, a linear mapping of poverty rate differentials, and a network analysis. Map 1 is perhaps the most conventional representation of a territorial indicator: each border region is considered as a zone assigned to a value class and is thus represented by a particular colour. The map confirms the unequal distribution of poverty in West Africa. With a regional poverty rate above 80%, disadvantaged regions in dark green are particularly numerous in the northern parts of Ghana, Togo, as well as in Niger, Sierra Leone, Liberia and Senegambia. By contrast, low poverty rates are found along the Gulf of Guinea as well as in the Sahara regions of North African countries. The second way of representing poverty differentials is to consider the boundaries themselves. On Map 1, the main cross-border discontinuities are indicated by red lines: the thicker the line the greater the gap between two border regions. The sharpest contrasts can be found between North African countries and their Sahelian neighbours. In West Africa itself, large poverty differentials exist between northern Togo, Benin and Ghana, between Côte d’Ivoire and Liberia, and between Mali and Senegal. In contrast, many regions have low poverty differentials, such as between Mali and Burkina Faso, or Guinea and Liberia. The coastal area of the Gulf of Guinea, from western Côte d’Ivoire to Cameroon, is also characterised by low poverty differentials (Table 1). The third – and probably less usual – representation is to consider border regions as nodes and poverty differentials as links between contiguous regions. While territorial mapping highlights the attributes of the regions or the width of the boundary lines, network analysis focuses on the structure and content of the links between border regions. This highlights border potentials and constraints, as border regions are not only influenced by their own attributes or by their immediate neighbours but also by their structural position in the whole network of regions. On Figure 1, node colours represent countries and link widths represent poverty differentials between regions. The size of the nodes is proportional to the number of connections each region has, a measure known as degree centrality. The location of the regions on the figure roughly corresponds to their geographic location, with Senegal on the left hand side, Mauritania at the top, and Chad on the right hand side. The figure clearly shows that some regions, such as Donga in Benin and Atakora in Benin, or Kidal in Mali are connected to many others through high border differentials, while other groups of regions, such as the ones between Dosso and Diffa on the Niger-Nigeria border, have low poverty differentials. Both form clusters of regions, which share similar levels of poverty across countries. The number of contiguous neighbours to which each border region is connected also greatly varies across West Africa. Donga (BEN), Kolda (SEN), Savanes (TGO), Kayes (MLI) and Agadez (NER) are among the most connected regions. This structural position offers interesting perspectives because being contiguous to many other regions allows for flexibility when it comes to intensifying cross-border co-operation. Border regions with many neighbours can choose which partners present the best accessibility, the most interesting complementarities or the closest institutional frameworks when they develop cross-border projects. The potential of collaboration is more limited for those regions that are structurally peripheral and depend on a single neighbour to engage in cross-border co-operation. Figure 1: The network of West African border regions (degree centrality)  Source: Calculations and cartography by Walther and Vollmer (2015), based on UNDP and IMF reports

The main policy implication of our approach is that cross-border co-operation should build on the great diversity of regions in West Africa and develop projects and institutional structures tailored to the potential of each region. Considering the variety of needs, and the unequal development patterns of West African regions, cross-border co-operation initiatives would work best, we assume, if policies provide public goods adapted to the specific challenges of each region. The heterogeneity of institutional systems also calls for policies based on the idea that local actors and institutions shape the development potential of cross-border co-operation and can be mobilised to foster economic development. Densely populated cross-border regions, such as Hausaland, will have different needs than cross-border regions with low population densities. Coastal and industrialised cross-border regions, such as the Lagos-Abidjan corridor, will require co-operation schemes that are of little use in regions dominated by agriculture or mining. Cross-border regions polarised by several regional urban centres, such as the Sikasso-Korhogo-Bobo Dioulasso area, will not need the same institutional framework as smaller rural regions. Particular attention, we argue, should be paid to the local circumstances within which regionalism occurs, so that the 32,000 km of West African borders can develop unique cross-border co-operation initiatives. For more on the above issue please refer to: The Sahel and West Africa Club (SWAC) at the OECD is an international platform for policy dialogue and analysis devoted to regional issues in West Africa (@SWAC_OECD). For more information on the 2015-16 West African Perspectives programme please visit: http://www.oecd.org/swac/ourwork/cross-border-co-operation.htm About the authors  Olivier Walther is Consultant, SWAC/OECD Sebastian Vollmer is Statistician, University of Southern Denmark. This article was published in GREAT Insights Volume 4, Issue 6 (December 2015/January 2016).
Loading Conversation
Africa West Africa
You may also like
Paper 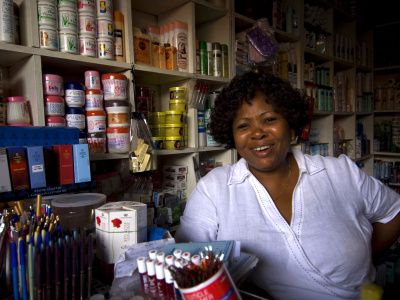