Cautions against Conflation: Peacebuilding and Statebuilding as Distinct and Complimentary Policy Agendas

Over the last decade, peacebuilding and statebuilding have been increasingly merged as policy agendas. There is logic to this; as the OECD-Development Assistance Committee (DAC) has argued, they form an interrelated process with similar underlying problems and a common overall purpose. The aid community has broadly adopted this view, arguing the need for aid synergy and effectiveness. Think tanks and policy institutes working close to the United Nations (UN), and the UN itself, have also generally supported a marrying of the two, in keeping with the primacy of the state in intergovernmental affairs.

Here it is argued that while peacebuilding and statebuilding are distinct and complimentary agendas, merging them entirely and allowing them to be conflated blurs lesson learning and fosters compromises within both that inhibit their potential distinct, positive contributions. What is needed rather is ongoing reflection on how both play out in real world contexts, and allowing both to flourish while strengthening efforts to ensure they work in a complimentary manner towards common objectives. The two concepts and their relationship are now briefly explored, followed by reflection on the International Dialogue on Peacebuilding and Statebuilding (IDPS) process, to illustrate the arguments put forth.

Perspectives on peacebuilding, statebuilding and the relationship(1)

Peacebuilding involves a range of measures targeted to reduce the risk of lapsing or relapsing into conflict by strengthening national capacities at all levels for conflict management, and to lay the foundations for sustainable peace and development.(2)

Statebuilding is an endogenous process to enhance capacity, institutions and legitimacy of the state driven by state-society relations. Positive statebuilding processes involve reciprocal relations between a state that delivers services for its people and social and political groups who constructively engage with their state.(3)

Despite considerable policy consensus on the concepts, the practice of both has been and continues to be significantly varied and widely critiqued.(4) While both contain commitments to being understood and driven locally, both have suffered critiques for being delivered in top down and externally led, template-driven manners, insufficiently attentive to context and lacking strategy or clear theories of change. Peacebuilding in particular has been accused of ‘liberal’ leanings, i.e. that it has rested on narrow notions of democracy (e.g. elections) and undervalued attention to the role of state institutions, focused on the individual rather than the community, marginalised traditional/ customary forms of authority and power, and supported or even ‘built’ formal, civil society in ways that fuel state-society tensions. Critics have also suggested that efforts have effectively not addressed the structural sources of conflict. Statebuilding has been similarly accused of not sufficiently valuing endogenous institutions and practices or forms of resilience within societies, and neglecting the societal dimension of statebuilding – especially horizontal relationships within society.

Within policy discussions that have laid a path for their merger, the different histories, approaches, advocates and delivery vehicles with associated mandates, funding channels, timelines have been recognised.(5) The ‘tensions’ between the two have also been examined(6) and include that: 1) statebuilding can spark or facilitate armed conflict; 2) peacebuilding can undermine statebuilding when it bypasses state institutions; 3) short-term compromises in the interests of peace may be at odds with requirements for longer-term peace (i.e. appeasing spoilers can undermine the development of new institutions that endeavour to not reproduce sources of conflict). While these tensions rest on particular, and somewhat limited understandings of each, they nonetheless raise important concerns around merging the concepts.

The International Dialogue on Peacebuilding and Statebuilding(7)

A major policy effort since 2008 involving states affected by conflict and fragility (the g7+), international partners (northern donors) and civil society (both international and national, within g7+ countries)(8), the IDPS provides useful insights into topic at hand.

From the start, the IDPS process, and its New Deal Framework for Engagement in Fragile States (see box on New Deal, pg. 17) (9) effectively brought peacebuilding and statebuilding under the same umbrella. In a synthesis report prepared to inform discussions at the first meeting of the IDPS in Dili, Timor Leste, it was suggested that:

Peacebuilding and statebuilding are reinforcing processes that support the building of effective, legitimate, accountable and responsive states. These overlapping but distinct processes are essential elements for guiding national and international efforts in addressing state fragility and promoting peace and stability in situations of conflict and fragility.(10)

Since this time the terms have effectively been merged without attention to their distinctness, towards developing Peacebuilding and Statebuilding Goals (PSGs) and indicators to measure progress towards these goals, and in the overarching roll out of New Deal implementation – with associated fragility assessments and compacts. Throughout, the content of the frameworks and processes developed have reflected significant focus towards the capacity needs and challenges of state institutions.

This is unsurprising given that the process is being led by the g7+, which endeavours to support ‘state-led transitions from fragility to agility’ and to place powerful demands on the international aid system to improve aid mechanisms, relevance, and results. The orientation also logically reflects the reason for the g7+ and IDPS emergence in the first place – to rectify the problem of g7+ countries being the worst performers in Millennium Development Goal achievement, reflecting the consensus that states need functioning institutions first, before development goals can be achieved.

The first involves the need for greater attention to overall strategy, and clear theories of change guiding efforts out of fragility and towards resilience, or peace. This does not mean one linear path across countries, but rather deep national reflection on 1) the drivers of conflict and fragility and the capacities for resilience and peace, and 2) the strategic path to transform the former and strengthen the latter – analysis that should lie at the heart of the development of fragility assessments and compacts. The fragility assessment tool and its framing focused on monitoring progress of state institutions in PSG areas, however, has limited this potential. It has assumed a narrow theory of change around state institutions at the heat of peacebuilding and statebuilding, limiting attention to the societal dimensions of both, and issues of horizontal and vertical cohesion. It has also limited discussions around the relationship and interactions of PSG areas, reproducing siloed analysis and action (a key critique of a decade of peacebuilding). While efforts were undoubtedly made, and are still being made, to infuse conflict, fragility and resilience analysis into the assessment tools and processes across countries, there has been varying levels of commitment to this, and mixed results.

The fragility assessment tool is also not conducive for reflection on the international sources and drivers of conflict and fragility – a second area of civil society critique and focus. The national, institutional (statebuilding) focus and lens of fragility and conflict obscured discussions of external drivers – a manifestation of the blurring and conflating of concepts.

Third, civil society has focused on the need to promote wide societal participation and ownership in and of the New Deal – a commitment that lies at the heart of the process endorsed by the g7+ and international partners. This ‘process’ component again captures both vertical elements (dialogue between state and society) but also horizontal (within and between societal groups). The vertical element is consistent with the newer concept of statebuilding. While the IDPS process is advancing roles for civil society in policymaking with attention on societies in peacebuilding and statebuilding both at global and national (g7+) levels, there are strengths and weaknesses in the realisation of this commitment, to date. The New Deal Compacts are illustrative. While they are meant to reflect the third step of ‘inclusive country-led and country owned transitions out of fragility’(11), the tendency to date is that they reflect priority agreements between governments and donors, without clear linkages to the fragility assessments and without clear efforts to build inclusive and societally owned agreement around priorities.

Despite newer directions in statebuilding thinking, practice has yet to ‘catch up’. The ways in which state-society relations manifest and are nurtured in the pursuit of a social contract that serves effective, legitimate, accountable and ultimately peaceful states is highly context dependent. A peacebuilding lens can support good practice here, suggesting how statebuilding processes can unfold in conflict and peace-sensitive manners that engage society at all levels – and not just vertically but horizontally.

Peacebuilding is dynamically responding to critiques in the development of alternative models and approaches. At the same time, a significant engine of the global peacebuilding community comes from scholar-practitioners who too often ignore the state, or go around it, focusing on horizontal relations within society. This tendency can also be seen in UN agency work, and also the World Bank, who are on the one hand rightly targeting communities in an effort to make their work more ‘bottom up.’ Problematically however, the conceptual and operational linkages to bring these bottom up and top down processes together remain vague, and politically and technically challenged.

Peacebuilding and statebuilding should not simply be merged, or married – both are too important in their own right and their relationship needs to be assessed in particular contexts. Instead, continued efforts to understand both and respond to shortcomings of each are needed, while drawing from and building upon the strengths of each to address contemporary contexts of conflict and fragility. The International Dialogue is an ideal forum for deliberating and providing leadership on this task.

6. See for example, Call, Charles. ‘Building States to Build Peace: A Critical Analysis’. Journal of Peacebuilding and Development, 4:2, 2008. This reflects on research across countries by (then) International Peace Academy’s “building states to build peace” project.

9. The guiding framework for the process, endorsed at the Fourth High-Level Forum on Aid Effectiveness in Busan in November 2011 by over forty countries and international organisations.

A dialogue of the deaf?
Commentary
The future belongs to Africa if.. Between 'Afro-pessimism', 'Afro-optimism' and ‘Afro-realism’ – but exactly who is watching what remains somewhat unclear
Great Insights magazine
The Post-2015 Challenge for Development: A New EIB Instrument to take on Riskier Projects
Project 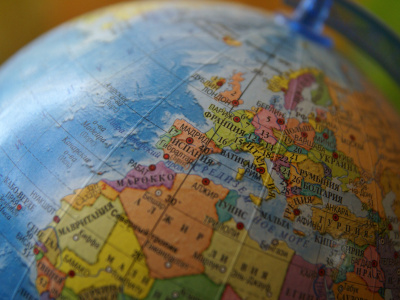