Matching means to priorities: Challenges for EU-Africa relations in 2017

This edition of ECDPM’s Challenges paper explores some of the political choices underlying the seemingly technical issues of financing for development and EU-Africa cooperation. It first considers opportunities in 2017 for adapting EU external action policy and practice to today’s challenges, such as by reassessing the EU’s financing instruments. Second, it casts an eye forward to the Fifth EU-Africa Summit, which represents an opportunity to advance joint European-African priorities on migration, peace and security, and youth affairs. Third, it looks at ongoing efforts towards greater financial autonomy for the AU and their potential to help deliver on the promises of Agenda 2063, the AU’s vision for Africa’s future. Finally, we dig into the topic of financing for development, to explore synergies and challenges in catalysing new public and private resources. These are illustrated by an analysis of key issues related to promoting sustainable agriculture in Africa – including linking food security and climate finance.

Twenty-sixteen may well come to be seen as the start of a shift in course for Africa-Europe relations. Both continents face major challenges that affect the way they relate to one another. Continuing financial difficulties, the wars in Syria and Iraq and the global terrorist threat are pushing both continents towards more hard-line stances and self-interested foreign policy, and they are less willing to compromise. The election of Donald Trump as the 45th president of the United States is yet another factor that could impact the current geopolitical realities, pushing the European Union (EU) and Africa into more marginal positions at the top tables of global action.

Europe itself continues to struggle to define solid responses to multiple challenges, not least irregular migration and forced displacements from conflicts and protracted crises in the EU neighbourhood and beyond. These have contributed to a redefinition of EU foreign policy and increasingly blurred the lines between internal and external security – for example, in relation to border security and terrorism. Overall, the EU has become more explicitly interest-oriented. This is well illustrated by the ‘principled pragmatism’ of the EU’s new Global Strategy on Foreign and Security Policy. All this is taking place in the context of what could be seen as an existential crisis for the EU, following the United Kingdom (UK) decision by referendum to leave the Union. The EU is being called upon to prove its added value to the European people. France’s
presidential election and the general elections in Germany and the Netherlands in 2017 are being looked to with concern, should they confirm the rise of Eurosceptic and populist forces.

Africa also faces challenges, as it confronts the consequences of violent conflict, high youth unemployment and migration. Against this backdrop, the African Union (AU) is seeking to strengthen its position as a credible and autonomous actor. Like Europe, Africa needs to deliver on new international commitments, such as the Sustainable Development Goals (SDGs), or the ‘Global Goals’ as they are also called, and the Addis Ababa Action Agenda on financing for development. This will require new modes of cooperation aligned with Africa’s changing relations with its partners. By the same token, when it comes to migration, Europe does, for once, seem to need Africa more than the other way around.

A number of opportunities are ahead in 2017 to adapt European and African policy and practice to new priorities and the evolving context and to balance hard-line stances with more pragmatic cooperation. The proposed revision of the European Consensus on Development is one such opening. Another is the mid-term review processes for the EU’s Multiannual Financial Framework (MFF) and external action instruments. Conclusions from these reviews will provide clues about the EU’s upcoming budget priorities as well. Last but not least, the Fifth EU-Africa Summit is scheduled for November 2017 in Cote d’Ivoire, after the AU will have appointed a new set of commissioners.

A chance to get it right: Challenges for Africa-Europe relations in 2018
Commentary 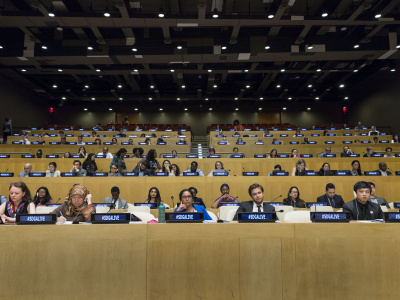