Just before travelling to Durban for the annual Partnership Platform of the Comprehensive Africa Agriculture Development Programme (CAADP), I was asking whether such meeting could  become a key milestone for the African Union ‘year of food security’ and start making CAADP more result-oriented.

From what I’ve seen in Durban (March 18-22), my answer is: yes, it was a very good meeting and I believe CAADP can make it!

The Partnership Platform was much better prepared, structured and facilitated than in previous years. This resulted in proper updates for all stakeholders on the planning and implementation of CAADP, more evidence to assess progress made, as well as systematic sharing of experiences and lessons learned, including in thematic areas that CAADP so far had not sufficiently addressed (e.g. land policy, public-private-partnerships, nutrition security, regional trade and infrastructure).

The Platform also adopted two key frameworks that will improve the overall accountability of the CAADP process in the future.

The Partnership Agreement, aimed at clarifying how CAADP partners will coordinate efforts and align resources and actions in the next decade to achieve the goals and targets set out under CAADP, thus also trying to systematise the implementation of subsidiarity (i.e. role and targets of each partner, which presently are often unclear and overlapping).

The CAADP Results Framework, articulating those goals and targets, and intended to ensure that CAADP is result-oriented, indicators can track its progress, and its achievements (reforms, investments, socio-economic performance, etc.) can be measured.

These two frameworks will be submitted for endorsement to African leaders. Firstly, with Ministers at the end of April, AU Joint Conference of Ministers of Agriculture, Rural Development, Fisheries & Aquaculture; then Heads of State at the end of June, AU Summit. This is another positive step towards a more result-oriented CAADP, since in the past many stakeholders could legitimately criticise CAADP for not being sufficiently mainstreamed in the official AU-RECs organs, hence not receiving enough attention at the highest political level.

At those two meetings African leaders will also consider the proposals that emerged from the Partnership Platform in terms of thematic goals, targets and actions for the next 10 years of CAADP. Leaders will translate into political commitments the proposals identified in Durban by the nine work-streams of CAADP (based on lessons learned and emerging challenges and opportunities).

The Partnership Platform did not see a change in gear in terms of a direct and stronger role of African national-level actors (individual governments, agriculture entrepreneurs, smallholder farmers) in continental CAADP. It is true that for the first time parliamentarians were given more space and a dedicated plenary session panel to debate around CAADP. But, although a number of them were agriculture committee chairs in the respective Parliaments and seemed well informed of agricultural development issues, most of them had to admit having little knowledge of the CAADP processes.

The inadequate engagement of national stakeholders was confirmed by Dr Mayaki, the CEO of NEPAD, during his opening keynote address in Durban. He acknowledged that, despite great progress, the major remaining risks for CAADP in the years ahead are: perceived lack of impact at the country level; overreliance on donor funding to implement CAADP; “bureaucratisation” of CAADP, meaning that it is handled mostly by few specialists in continental and regional institutions, and national agriculture ministries, but not trickling down to the local private sector and stakeholders.

There is still a long way to go for the ownership of the CAADP process to shift fully toward national level actors, including through a move to make AU member states the major providers of the financial resources for CAADP (instead of the donors) and their regular engagement in CAADP at higher political level.

Regional Integration and Markets, and a New Donor Trust Fund (and ECDPM Inputs There)

Two other positive results from Durban are worth mentioning here, because ECDPM has been closely involved in the related processes.

Firstly, we have been working with AUC, NEPAD, RECs and others since 2011 to raise awareness and facilitate stronger linkages between the CAADP and trade and regional integration processes in Africa. In Durban, the work-stream on Regional Trade and Infrastructure that we attended and contributed to facilitate, identified the key goals and actions to be considered by African leaders in order to strengthen the contribution of regional markets to food security and other CAADP objectives. At ECDPM we have been emphasising consistently the importance of “bridging trade and agriculture”, and this is now becoming officially recognised within CAADP. The related goals and actions that should be endorsed by African leaders are likely to include:

1. Double intra-African agricultural trade by 2025, through i) increased investment in regional value chain development ii) removal of non-tariff barriers and harmonization of standards;

Secondly, discussions at the Partnership Platform around the second phase of the CAADP multi-donor trust fund (MDTFII) were also promising. ECDPM’s independent report into the MTDFI pointed to the importance of continuation of the MDTF to support the overall CAADP process. It also stressed that improvements are required in terms of: governance of the fund; more support to African institutions beyond NEPAD, AUC and RECs (e.g. continental or regional networks of NSAs and knowledge institutes) as well as for priority themes where more work is needed to improve food security; a larger share of MDTF resources to urgently address demands from national stakeholders.

First indications that emerged from Durban about the MDTFII design go into that direction, which is also very good news for the overall improvement of CAADP. The total size of the MDTF will likely increase; modalities for disbursement are more transparent and related to the CAADP Results Framework; more resources should go directly to country-level initiatives, with more space possible to also support farmers organisations and other NSAs. 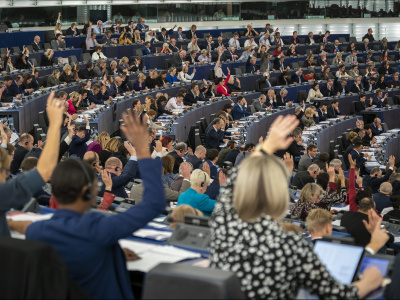 Bringing the invisible into perspective: Reference document for using the 5Cs framework to plan, monitor and evaluate capacity and results of capacity development processes
Paper

Sewing the pieces together: Towards an EU strategy for fair and sustainable textiles
Commentary
‘Friends of Development’ can defend assistance in the future EU budget
Commentary
Private sector and development: Can we blend great expectations with a willingness to fail?
Evaluation
Final report of the study on Common Foreign and Security Policy/ Development: Use of CPA article 96
https://ecdpm.org/work/good-news-from-durban-caadp-getting-more-results-oriented