Cleaning the External Debt Slate: What Difference Does it Make for Development in the DRC?

On June 30th, 2010, at the celebration of its 50th anniversary of independence, the external debt slate of the DRC was cleaned by the international community within the framework of the HIPC/MDRI Initiatives (see Cassimon contribution for a general explanation). Both parties agreed on the cancellation of 7.3 billion USD of external debt after a decade of negotiations and the satisfactory implementation of a series of preconditions.

When the government of Joseph Kabila came to power in January 2001, it inherited an insurmountable external debt burden. The origins of this debt are to be found in the early seventies when a number of prestigious projects of President Mobutu were generously financed by Western governments in a cold war sphere. In the end however, the big infrastructure projects and industrial ventures did not materialize or did never live up to their potential, but the debt remained. Besides these white elephants, unfavorable price evolutions on the international market, corruption, nationalization and defensive lending by bilateral donors further increased the debt.

Their negative impact on debt sustainability became soon evident. From the middle of the seventies onwards, repeated debt rescheduling has been implemented, amounting to nine operations between 1976 and 1989. These first generation debt relief operations, which mostly rescheduled debts at market interest rates, failed however to restore debt sustainability. Due to ; the implosion of the formal economy in the late eighties and early nineties, the outbreak of the Great War (1998-2003) in the DRC as a consequence of civil war and genocide in Rwanda, the DRC government ultimately stopped all payments and merely accumulated arrears and penalty interests, of about 700 million USD annually. All this inflated the country’s debt to more than 13 billion USD, of which 78% consisted of arrears, at the moment the country tried to reintegrate in the community.

In line with the peace agreement of Sun City (2003), the DRC and its creditors agreed to initiate debt relief negotiations under the framework of the HIPC Initiative. As one of the poorest countries in the world, and facing debt levels six times the HIPC-thresholds, DRC’s eligibility for HIPC was never in doubt. The major obstacle for progress were the multilateral and bilateral arrears, which were cleared by bridge loans, followed by an initial debt restructuring including debt relief by Paris Club bilateral creditors in 2002. In July 2003 the country reachedHIPC decision point after its government had shown sign of its good intentions by finalizing a first version of its poverty reduction strategy paper (PRSP) and by having successfully implemented an economic recovery program, including the elimination of hyperinflation, liberalization of the economy and the initiation of major structural reforms. From the decision point onwards, the DRC received large reductions on its debt service payments, in anticipation of a large, irrevocable cancellation of its stock of debt at completion point.

In order to reach that completion point, the country agreed with its creditors to comply with a set of preconditions, some of which were more traditional HIPC triggers: the participatory completion and successful implementation of a PRSP; satisfactory use of the budgetary savings from HIPC for pro-poor expenditures; and maintenance of macroeconomic stability as indicated by satisfactory performance under an IMF program. In addition, a number of country-specific triggers were listed: the implementation of better public expenditure management; enhanced governance and public service delivery in priority sectors and procurement; the adoption of satisfactory sector development strategies and related implementation plans for the social and rural sectors; and a more rigorous public debt management. Although macroeconomic performance went off track in 2006, mainly due to excessive expenditures during election time, and remained difficult afterwards due to the global economic and financial crisis, performance on these triggers was generally satisfactory.

The road to completion

As completion point came within reach, an unexpected obstacle brought completion of the process at risk. While the DRC government was on the one side engaging in a process of receiving debt relief, it was simultaneously negotiating with Chinese partners a on a new contract that foresaw access to mineral resources in exchange for infrastructure works funding. The Congolese government had to guarantee the investment for a total value of 9.5 billion USD. As this new debt would fully offset the debt relief foreseen, the international community, with the IMF on top, opposed the contract and forced both parties to re-negotiate the terms of the contract before for DRC could reach completion point. In November 2009, both parties agreed that the Congolese guarantee should only cover 3 billion USD of the contract .

Seven years after reaching decision point, at its 50th anniversary of independence, the DRC reached completion point of the HIPC Initiative. To bring debt burden down to the HIPC-sustainability threshold of 150% of exports, 7.3 billion USD of debt claims (in PV terms ) were cancelled. Following the HIPC principle of equiproportionality, all donors had to reduce their debt by 82%. Multilateral creditors took up 2.6 billion of this relief, the Paris Club bilateral creditors added 4.1 billion USD. The share of remaining bilateral creditors was 229 million USD and that of the commercial creditors amounted to 315.5 million USD. Of these creditors, not all of them have already granted their part of debt relief.

Also in the case of DRC, both multilateral and Paris Club bilateral creditors went beyond their strict HIPC commitments. Paris Club creditors granted full debt relief on their remaining eligible bilateral claims, while participating multilateral creditors (World Bank, IMF, African Development Bank) did so for their remaining eligible claims in the framework of the Multilateral Debt Relief Initiative (MDRI) and also the EU did an additional effort; this all led to a further debt reduction by about 7000 million USD in Present Value (PV) terms.

All in all, the debt relief operations would lead to a reduction of external debt to about 3 billion USD, or about 57% of exports, at the end of 2010, which was well below international thresholds of debt sustainability. In this particular sense, the external debt slate of the country was cleaned, i.e. made sustainable again. Forward-looking monitoring mechanisms, such as through regular Debt Sustainability Analysis (DSA) performed jointly with the IMF, should ensure that the external debt of DRC remains sustainable over time.

Besides a restoration of debt sustainability at least in the short term, the debt deal has led to other development-related achievements. Did the cancellation of debt lead to direct resource savings in the government budget that could be put to use for other development-oriented spending? Not in a very direct way, as the debt deal in fact increased debt service payments by the Congolese government, compared to the situation before decision point, when the Congolese government had stopped all debt service payments and accumulated arrears. In order to retain eligibility for IDA and IMF financing during the interim period, the government had to restore debt service in the interim period. This net negative effect (of about 772 million USD) was however more than compensated by an increase in aid to the country (about 1.71billion USD) from the donor community as the DRC escaped its international isolation.

Moreover, taking into account the indirect fiscal effects, the picture becomes gloomier. With support of the international community, the DRC followed a path of economic liberalization, economic recovery, business climate improvement and economic growth. As a result of these efforts, and the broader stabilization efforts which continued upon the Sun City peace agreement, not only macroeconomic stability was restored, but more importantly, government tax revenues increased considerably, boosting fiscal performance by the country, a tenfold increase compared to the period of country isolation.

Further results are much more difficult to credibly attribute to the debt relief operation. At this level, interaction with other evolutions like the stabilization of the country or the re-engagement of the international community may play an equally-important role. Over the interim period, democratic governance has improved as illustrated by the relative successful completion of the elections in 2005-2006. Also economic governance has improved. While the Congolese GDP was on a downward slope from the mid-eighties onwards, the trend has been reversed since 2003. Economic growth has been positive since then and inflation has been kept under control. In this climate of macroeconomic stability, private investors were attracted, mainly in the mining and the building- or construction sector.

The impact on poverty is even more difficult to evaluate given that poverty statistics are unreliable. Overall, most poverty-related statistics show a positive trend, with most significant improvements in the health and education sectors. It is however fair to conclude that, due its (post-)conflict status, reconstruction of the state and institutional reinforcement were higher on the government’s agenda than investments in social sectors. A large part of the funding has thus been used for a reinforcement of the central administration, which certainly is a prerequisite for effective poverty reduction in the longer term. The education sector, which has benefited most from HIPC spending, noted one of the most significant improvements in poverty-related outcome indicators, with e.g. schooling rates increasing substantially. However, to what extent this increase will lead to the improvement of more impact-related indicators, such as an increase of literacy rates, the quality of schooling, or a reduction in parents-based funding of schooling remains doubtful.

In sum , the debt relief exercise was relative successful in that the country could again catch up with the international community , restore its macro-economic imbalances , increase substantially budget revenue and enter a positive growth path. However - in view of the development and financing needs of a country, as big as western Europe, with a dire need of investment in infrastructure, renewable energy and proper management of the tropical forest for the benefit of the international community - the lending (and debt) capacity of the country is far off the target. If development lending needs would at least amount to a 150 billion dollar, but sustainable debt for the country is only estimated at some 10 billion dollar, one can measure what would really be needed not only for the DRC but for the international community as well.

The full report can be accessed here: http://diplomatie.belgium.be/nl/binaries/evaluation_allegement_dette_rdc_rapport_principal_tcm314-187891.pdf

Momentarily only available in French. The English version is forthcoming, and can soon be found here: http://diplomatie.belgium.be/en/policy/development_cooperation/evaluation/conferences

Stefaan Marysse is director of the Belgian Reference Centre for Expertise for Central Africa (E-CA — CRE-AC) and prof. dr. emeritus in Political Economy and Development at the Institute of Development Policy at University of Antwerp , where Danny Cassimon is a Professor and Karel Verbeke a Research Assistant.

This article was published in Great Insights Volume 2, Issue 1 (January 2013)

Loading Conversation
You may also like
Paper
How to make EPAs WTO compatible? Reforming the rules on regional trade agreements
Report
The Pooling of Technical Assistance: An Overview based on Field Experience in six African Countries
Report
The political economy of regional integration in Africa: What drives and constrains regional organisations? Synthesis report
Commentary 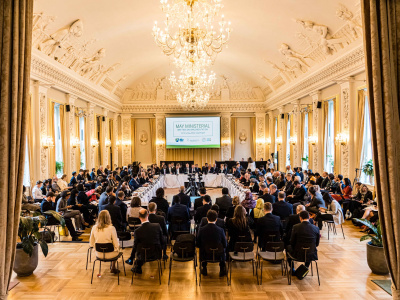