Coherence and Effectiveness: Challenges for ACP-EU Relations in 2008

For EU-watchers concerned with development and Africa, 2007 was dominated by two major debates which ultimately came together at the end of the year in the Africa- EU Summit in Lisbon. The objective of the event was nominally to reach final agreement on the new Joint Africa-EU Strategy that had gone through various steps of drafting and negotiation in the course of the year. But it was the other debate on trade that actually produced the Summit’s most striking moments and strongest language. In so doing it perhaps also inadvertently signalled the start of the new era in Afro- Euro relations, as the Summit organisers had hoped, a new era marked by more forthright exchanges of views between leaders.

The spark for some of the sharpest exchanges was of course African disquiet with the Economic Partnership Agreements (EPAs), which many Africans feel are being forced upon them by Europe. The subtext, was however also the fact that many African leaders feel stronger on the interna- tional stage than they have for some time. Growing international interest in African natural resources and energy, the advent of China as a major new international partner, other new donors that do not belong to the OECD-DAC club and have other ways of doing business, continuing G8 interest in African affairs, the now established international interest in the renewed African institutions and rising economic growth that is expected to reach 6% in 20071 all conspire to strengthen their hand. Of course many problems remain, but in the last seven years since the UN Millennium Summit the out- look for Africa has certainly improved and African leaders can therefore more readily permit themselves to deliver a few home truths to their European counterparts, even though the latter did not hesitate to reciprocate. As a result the Lisbon Summit may indeed mark the moment when these two old neighbours at last start to treat each other as partners with some shared views and some areas of disagreement, but never- theless working together towards common goals in a manner less tainted with out- dated paternalism and undue deference.

The Africa-EU Summit was a success in terms of reestablishing Afro-Euro relations at the highest level, with over 70 heads of state present out of a possible 80. The Brussels body politic will thus have to accept the reality that such continent-to- continent relations – as has been the case with Asia and Latin America for some years – will henceforth dominate the European Union’s relations with developing countries, displacing the dominance of other tradi- tional frameworks such as ACP-EU relations. 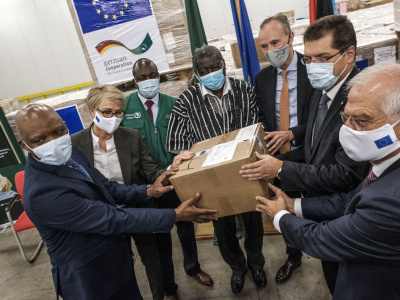 Fit for purpose: The EU’s role in global health in the era of COVID-19
Paper
Trade, Aid and Rural Development: EU Sugar Policy and the Experience of Swaziland
Brief
EU Development Cooperation under the Cyprus Presidency: How to Make a Difference?
Great Insights magazine

The world is changing: The relationship needs changing too
Great Insights magazine

How ‘to trade or not to trade’ is the question for third countries after Brexit
Brief
ACP-EU Cooperation on Readmission: Where Does it Stand and Where to Go?
https://ecdpm.org/work/coherence-and-effectiveness-challenges-for-acp-eu-relations-in-2008-1