The Africa Forum is the annual gathering where OECD and African policy makers, private sector representatives, academics and civil society leaders meet to debate the performance of African economies and the challenges ahead.

Organised by the OECD Development Centre and the German Federal Ministry for Economic Cooperation and Development, in collaboration with the German Federal Foreign Office and in partnership with the African Union Commission, the 2015 edition focused on Africa’s development agenda beyond 2015. It did so in light of the debates on Sustainable Development Goals and Financing for Development, the impact of the continent’s future demographic development on its economic transformation, and the policy responses to climate change.

The debates benefited from the conclusions of the African Economic Outlook 2015 report, jointly produced by the OECD Development Centre, African Development Bank (AfDB) and the United Nations Development Programme (UNDP). The publication is available at www.africaneconomicoutlook.org. 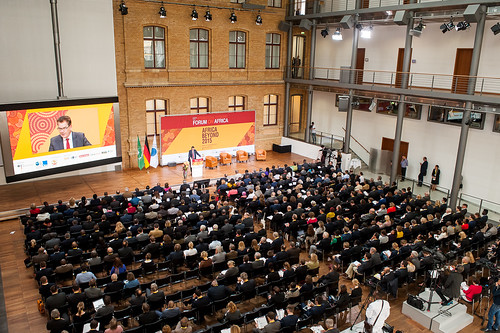 Alongside strong growth outlook for several African countries, global and pan-African discussions provide Africa policy makers with an unprecedented opportunity to chart a more inclusive and sustainable growth agenda for the continent.

“Superfoods can contribute moving up the value chain in Africa” – Carlos Lopes, UNECA

In the long-term, the stakes are high – how to transform African economies, end poverty, preserve the environment and ensure well-being and prosperity.

There were live tweets from the event via @OECD_Centre with #AfricaForum

Universality and Differentiation in the Post-2015 Development Agenda
Translating the universal post-2015 goals and targets into national actions, commitments, responsibilities and accountability that respect national priorities and circumstances is a major challenge. There is a need for a pragmatic and flexible differentiation system that accounts for country priorities and ownership, but builds in incentives to encourage ambitious contributions.

Africa and Europe combatting climate change: Towards a common agenda in 2015
The 2015 UN Climate Change Conference in Paris (COP21) is fast approaching. Despite promising progress in recent years, the negotiations of a new agreement to keep the dangers of climate change at bay still face many technical and political hurdles, and are plagued with divisions among countries.

Dossier: European Report on Development (ERD)
The fifth edition of the an influential and independent European Report on Development (ERD 2015), launched in May 2015, has the theme of “Combining finance and policies to implement a transformative post-2015 development agenda”. It aims to address financing and other means of implementation in the post-2015 context in order to bring the post-2015 finance and goal setting processes together.

Regional dynamics in Africa: High stakes for development
This paper explains the relevance of regional cooperation and integration for problem solving in Africa. It does so by highlighting a few ongoing regional processes, and by unpacking some of the key actors and factors at work in such processes.

Territorial development – GREAT Insights Volume 4, Issue 4
Too often, development approaches adopt a specific thematic or sectoral focus. In doing so, they tend to abstract from the territorial dimension and localisation level of development.

How does Africa speak with one voice? Africa’s evolving positions on aid effectiveness, climate change and the post-2015 goals
Africa is increasingly seeking to formulate a common African position ahead of key international events. Pathways to common positions are not always pre-defined and evolve depending on the needs that manifest themselves during the process. However, it is clear that in recent years, there is a consistent effort to formulate common positions ahead of key moments in the global agenda.